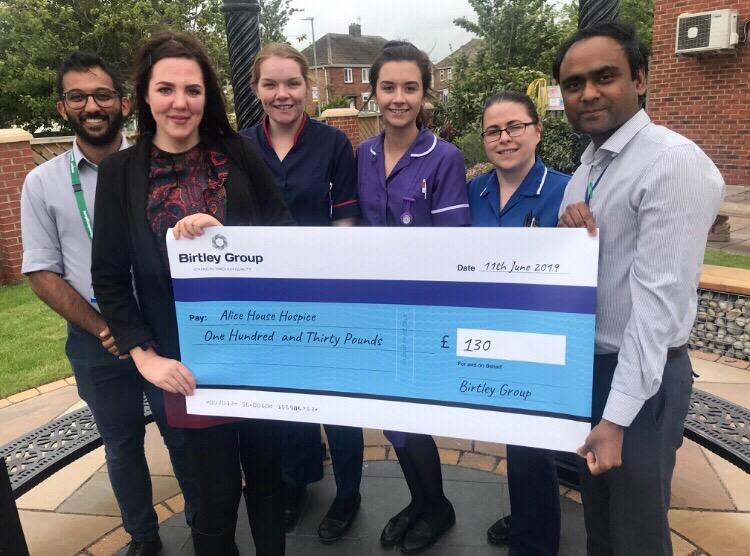 Expamet have recently donated £130 to local charity Alice House Hospice as part of their 130th Anniversary.

To mark the occasion of turning 130, we are hosting a series of monthly Facebook competitions, with the chance of our followers to win £130 worth of prizes.

We launched the competition on Facebook last month, three charities in Hartlepool were chosen at random and a vote as to who should receive the donation was opened to the public.  After receiving over 200 votes in total, Alice House Hospice was announced as the winner of a £130 cash donation.

Based in Hartlepool, Alice House Hospice exists to ensure people affected by a life limiting illness or the death of a loved one have care, comfort and support they need. As the only adult hospice in the Hartlepool and East Durham areas of the UK, their unique range of services makes a vital difference to the lives of thousands of families each year.

“It’s fantastic that Expamet chose to commemorate their anniversary with a charity donation and wonderful that their followers chose Alice House Hospice as the recipient. It was great to meet and show them around the Hospice to show just how valuable this type of support is. As with all donations we receive, this will be used to fund the care we provide to local people and families who are affected by incurable illnesses. On behalf of everyone at Alice House Hospice, I would like to thank Expamet and congratulate them on this milestone, as well as sending our appreciation to all the people who took the time to vote in the poll”

“We are thrilled to be supporting Alice House Hospice; they are a fantastic charity at the heart of our local community. It was inspiring to hear first-hand where our cash donation will be used in order to help sustain the vital care and work throughout the hospice.”

“130 years is a huge milestone, which could not have been achieved without the continued support and loyalty of our customers. As a way of thanks, we are offering all our customers current and future, the chance to win a £130 prize each month for the rest of the year, including tools, merchant vouchers and Expamet products.”

This site uses cookies to improve your experience. By using our website you agree to this. Find out more.